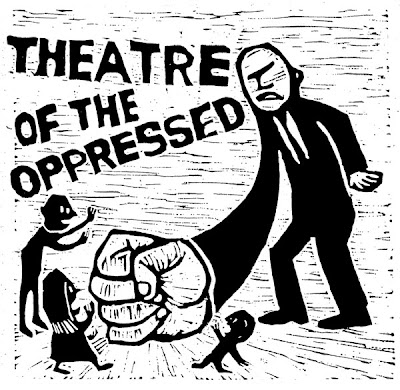 
T.O. Philly offers public workshops that individuals and groups can come to. We also work for organizations and institutions. We can tailor a workshop to whatever your group needs. You can see who we've worked with and what we've got coming up on this website's sidebar. Below are a few curricula that we regularly run. To bring a workshop to you, email "tophilly@gmail.com" or call 267-282-1057.

Whether you just want to play games or learn some games that you can play with others, we can do that! T.O. Philly has hundreds of games for groups of any size or age range that get us out of our heads and into our bodies, build trust and a cooperative spirit, and get at issues of social justice. Whether it's just for one or two hours, or one or two days, let the games begin!

Many of Theatre of the Oppressed's games and techniques "dynamize the senses" by working in silence or darkness or with limited mobility. Since 2012, we've been using these techniques to address issues of ability and disability. In 2015 T.O. Philly supported work on a play about vision loss and dis/ability passing with a series of sessions called Blind Games. In 2016 we expanded some of those ideas into a broader workshop called Unpacking Ability. Facilitated by people on the dis/ability spectrum, these themes can run deep in just a couple hours.

As our public discourse around gender and sexuality continues to change, the occasional workshop can help members of an organization or institution get on the same page. We offer everything from a "Gender 101" to more intensive sessions for groups ready to delve deeper into gender dynamics.

In 2013 we rolled out a curriculum all about race and undoing racism. We offer a short workshop called "Engaging Courageous Conversations on Race" that gives the basics. The "Unpacking Race" module can be a multi-part workshop series, weekend retreat, or something that a group does over the course of many months. We also offer workshops on undoing racism specifically for people of color and/or white allies, including a session that identifies White Fragility.

Theaatre of the Oppressed is a also a tool for organizations interested in improving communication, colllaboration, workplace environment, and for better fullfillment of a group's mission and vision.

The Cop & The Rainbow

The Cop in the Head and the Rainbow of Desire represent the introspective branch of Theatre of the Oppressed with roots in psychological and internalized forms of oppression. We can offer these sessions as performance demonstrations, with audience members volunteering to step up onstage to be in a scene. We also run Cop/Rainbow as one-day or two-day intensives. These techniques are really meant to be done on an ongoing basis as they are about a group coming together to collectively disarm the cops in our heads and sort out a spectrum of sometimes conflicting desires so that we have more tools for contending with ourselves in everyday life.

To book any of the above workshops (or others not on the list) email "tophilly@gmail.com" or leave a message at 267-282-1057 and someone will get back to you shortly.

Links to other groups using Theatre of the Oppressed

Keep up with Philadelphia Theatre of the Oppressed